The cassava root is long and tapered, with a firm, homogeneous flesh encased in a detachable rind, about 1mm thick, rough and brown on the outside. Commercial varieties can be 5 to 10 cm in diameter at the top, and around 15 cm to 30 cm long. A woody cordon runs along the root’s axis. The flesh can be chalk-white or yellowish. Cassava roots are very rich in starch, and contain significant amounts of calcium (50 mg/100g), phosphorus (40 mg/100g) and vitamin C (25 mg/100g). However, they are poor in protein and other nutrients. In contrast, cassava leaves are a good source of protein (rich in lysine), but deficient in the amino acid methionine and possibly tryptophan.

In Indonesia, Singkong or Ketela (cassava) is an important food. It can be cooked by frying or boiling, or processed by fermentation to make tapai and getuk cake, while the starch is made into krupuk crackers. In time of famine or food shortage, cassava is used to replace rice. In 2011, modified cassava flour became common, and some instant noodle producers have used it silently, especially for low-end instant noodles as a part substitute of pricy flour. The flour is often added to pastry flour although the result is a pastry that a little stif.

Cassava root is essentially a carbohydrate source.Its composition shows 60–65 percent moisture, 20–31 percent carbohydrate, 1–2 percent crude protein and a comparatively low content of vitamins and minerals. However, the roots are rich in calcium and vitamin C and contain a nutritionally significant quantity of thiamine, riboflavin and nicotinic acid. Cassava starch contains 70 percent amylopectin and 20 percent amylose. Cooked cassava starch has a digestibility of over 75 percent. Cassava root is a poor source of protein. Despite the very low quantity, the quality of cassava root protein is fairly good in terms of essential amino acids. Methionine, cysteine and cystine are, however, limiting amino acids.Cassava roots and leaves should not be consumed raw because they contain two cyanogenic glucosides, linamarin and lotaustralin.in cassava root. 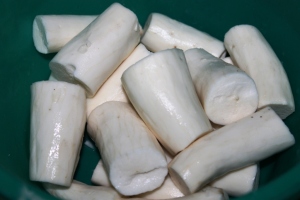 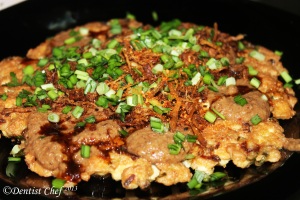