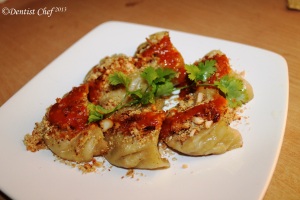 Dim sum refers to a style of Chinese food prepared as small bite-sized or individual portions of food traditionally served in small steamer baskets or on small plates. Dim sum is also well known for the unique way it is served in some restaurants, wherein fully cooked and ready-to-serve dim sum dishes are carted around the restaurant for customers to choose their orders while seated at their tables. 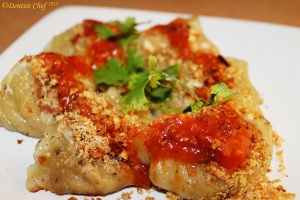 Jiaozi typically consists of a ground meat and/or vegetable filling wrapped into a thinly rolled piece of dough, which is then sealed by pressing the edges together or by crimping. Jiaozi should not be confused with wonton; jiaozi has a thicker skin and a relatively flatter, more oblate, double-saucer like shape (similar in shape to ravioli), and is usually eaten with a soy-vinegar dipping sauce (and/or hot chili sauce); while wontons have thinner skin, are rounder, and are usually served in broth. The dough for the jiaozi and wonton wrapper also consist of different ingredients. Pan fried dumplings: (guotie) literally “pan stick”, known as “potstickers” in N. America, (鍋貼; pinyin: guōtiē), also referred to as “dry-fried dumplings” (煎餃; pinyin: jiānjiǎo).

Jiaozi were so named because they were horn shaped. The Chinese for “horn” is jiǎo (角), and jiaozi was originally written with the Chinese character for “horn”, but later it was replaced by a specific character 餃, which has the food radical on the left and the phonetic component jiāo (交) on the right’. Jiaozi are eaten all year round, and can be eaten at any time of the day – breakfast, lunch or dinner. They can constitute one course, starter or side dish, or the main meal. In China, jiaozi are sometimes served as a last course during restaurant meals. As a dish prepared at home, each family has its own preferred method of making them, using favourite fillings, with types and methods of preparation varying widely from region to region.