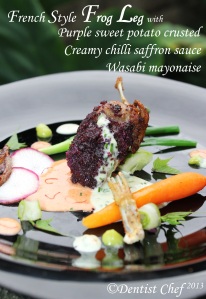 Frog legs are one of the better-known delicacies of French and Cantonese cuisine. They are also eaten in other regions, such as Thailand, Vietnam, Indonesia, the region of Alentejo in Portugal, Spain, Slovenia, northwest Greece, and Northern Italy, as well as the Southern regions of the United States. Currently the world’s largest exporter of frogs is Indonesia, also a large consumer. In regions such as Brazil, Mexico and the Caribbean many frogs are still caught wild. A type of frog called the edible frog is most often used for this dish. Frog legs are rich in protein, omega-3 fatty acids, vitamin A and potassium.They are often said to taste like chicken, because of their mild flavor, with a texture most similar to chicken wings. The taste and texture of frog meat approximately between chicken and fish.Frogs are raised commercially in certain countries, e.g. Vietnam. Frog muscle does not resolve rigor mortis as quickly as warm-blooded muscle (chicken, for example), so heat from cooking can cause fresh frog legs to twitch.The term “Frenched” of any bony or bone-in  meat means to exposing the bone for easy and fine serving.

In the English-speaking world this dish is most often associated with French cuisine, and hence a commonly used insult for the French is the Frogs.Frogs legs or cuisses de grenouille are particularly traditional in the region of the Dombes (département of Ain). Widespread consumption is relatively recent occurring within two hundred years. 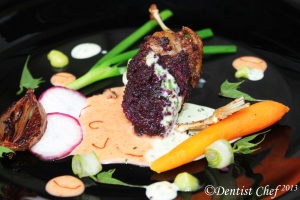 In Indonesian cuisine, frog-leg soup is known as swikee or swike, most probably brought by the Chinese community in Indonesia and popular in Chinese Indonesian cuisine. Swikee is mainly frog-leg soup with strong taste of garlic, gingers, and fermented soya beans (tauco), accompanied with celery or parsley leaves. Swikee is a typical dish from Purwodadi Grobogan, in Central Java province. There is also fried frog-legs in margarine and sweet soy sauce or tomato sauce, battered deep fried, grilled frog-legs or frog eggs in banana leaves (pepes telur kodok). The Javanese also eat the dried and crispily fried frog skin. The taste is close to the fried fish skin. Indonesia is the world’s largest exporter of frog meat, exporting more than 5000 tonnes of frog meat each year, mostly to France, Belgium and Luxemburg.Most of the supply in western Europe comes from frog farms in Indonesia, however there is concern that the frog legs from Indonesia were poached from wild frog populations that may be endangering wild amphibians.

How to make wasabi mayonaise : 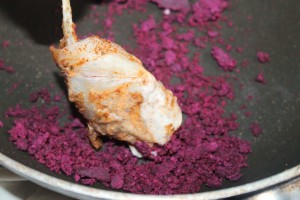