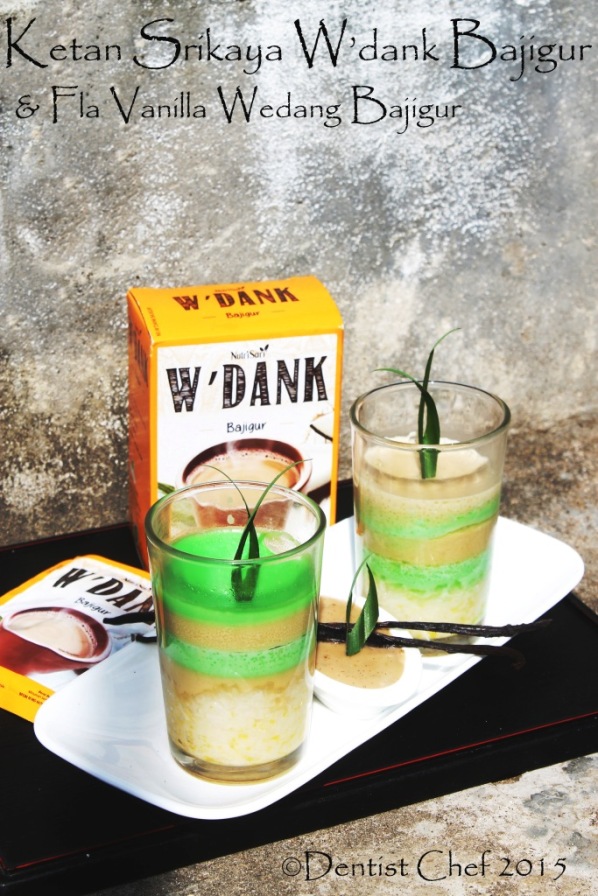 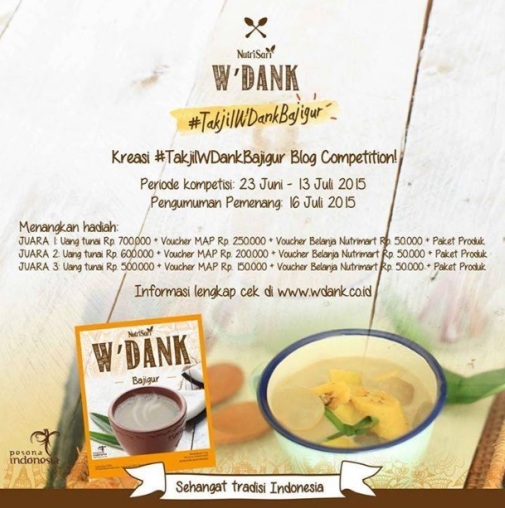 Ketan Srikaya W’dank Bajigur Lapis Pandan is participating in blogging competition #TakjilWDankBajigur held by W’dank Bajigur Nutrisari. Glutinous rice  that priorly cooked with salt and coconut milk topped with coconut cream custard is definitely suits for my Moslem friend to recharge the body energy after more than 12 Hours of fasting. 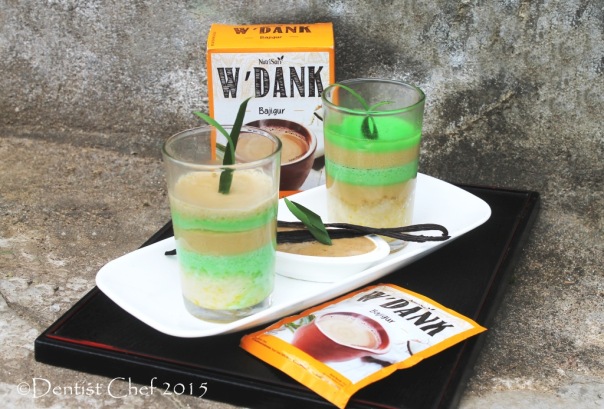 Ketan sarikaya usually served in festive occation like wedding ceremony and also as a takdjil or break fasting dessert in the Ramadhan or Moslem fasting month here in Palembang. Ketan srikaya even one of the hantaran or a staple gift that given by the groom’s family to the bride’s family before the traditional Palembangnese wedding ceremony held. 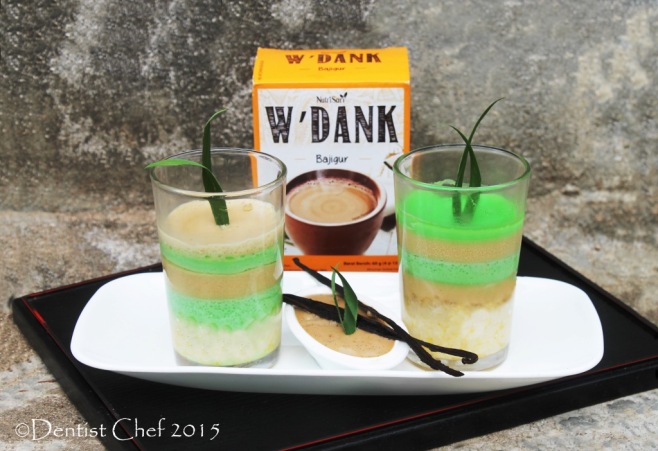 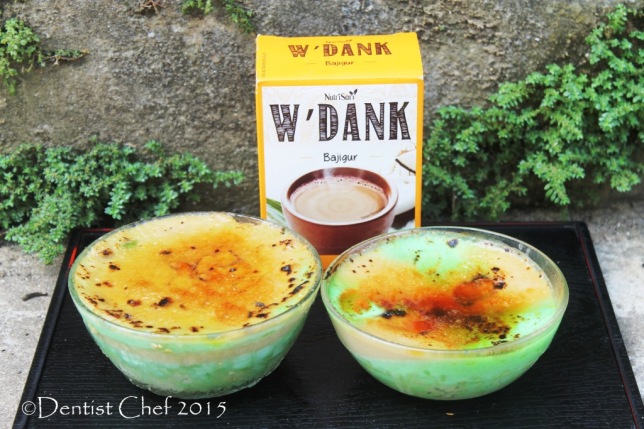 Ketan Srikaya Takjil W’dank Bajigur Lapis Pandan is my creation, instead using traditional pandan flavoured for ketan sarikaya, i also infused Wedang bajigur into the custard, so the custard had two different flavour; wedang  bajigur and pandan which is combined very well into upscale comforting duo. The fla also made from W’dank Bajigur that i’m infused with some genuine Indonesian vanilla bean. 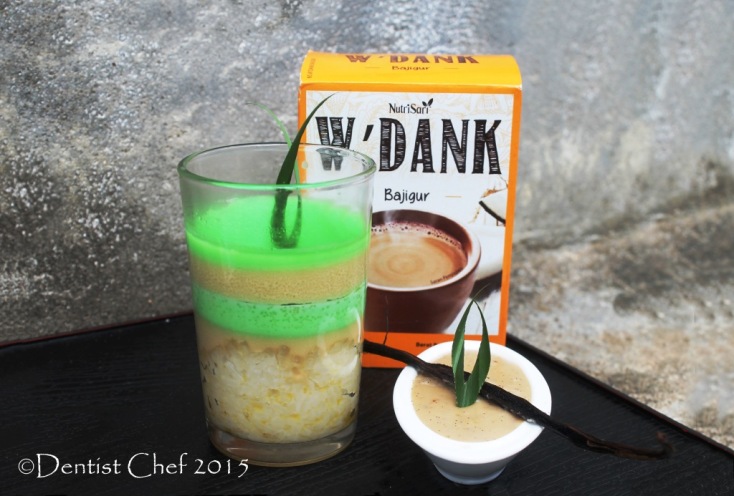 My Ketan Srikaya W’dank Bajigur Lapis Pandan served with W’dank Bajigur Vanilla Fla. My srikaya Takjil W’dank Bajigur custard is had two different color, the green is consist pandan extract flavour and the brown one contain W’dank bajigur. I try to layered the pandan and bajigur custard for a presentation purpose, you can create your own invention; marbled, overlapping or what ever technique you want, even you can pour it all the way as you wish. 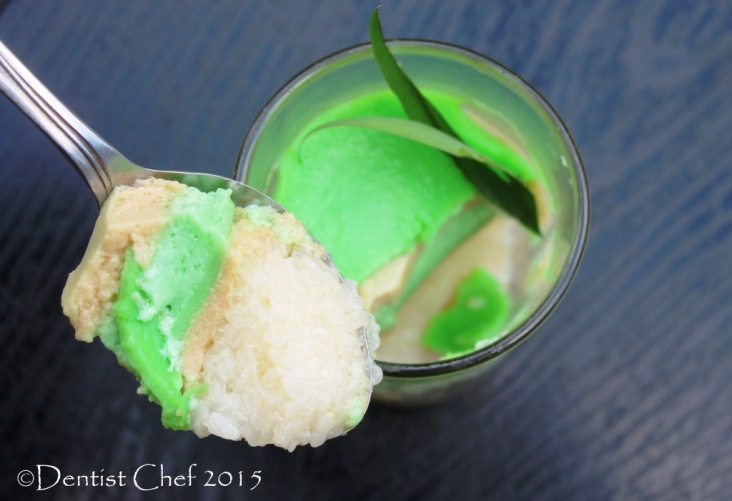 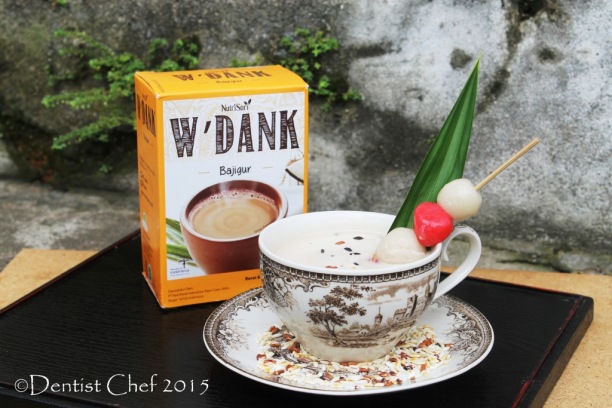 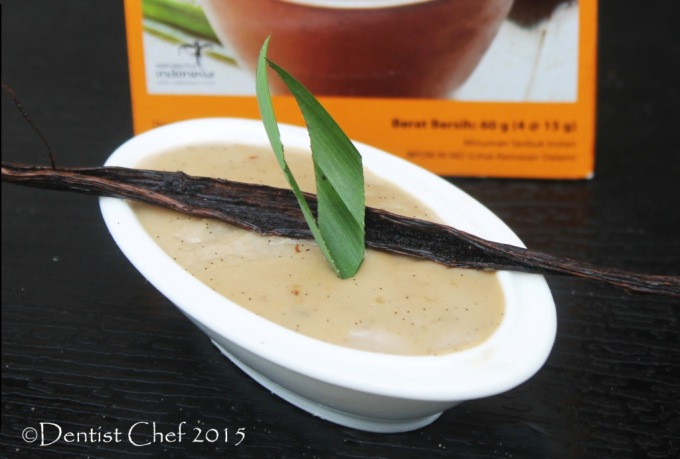 This is the vanilla bean bajigur fla made of W’dank Bajigur. I made the bajigur vanilla fla using genuine Papua Island organic vanilla bean that i dissolved with water, W’dank bajigur and some maizena, simmer with a very gentle stove until slighly bubbly and thicken a little bit. The W’dank Bajigur vanilla sauce then ready to served with the Ketan srikaya once it chilled in the refrigerator. 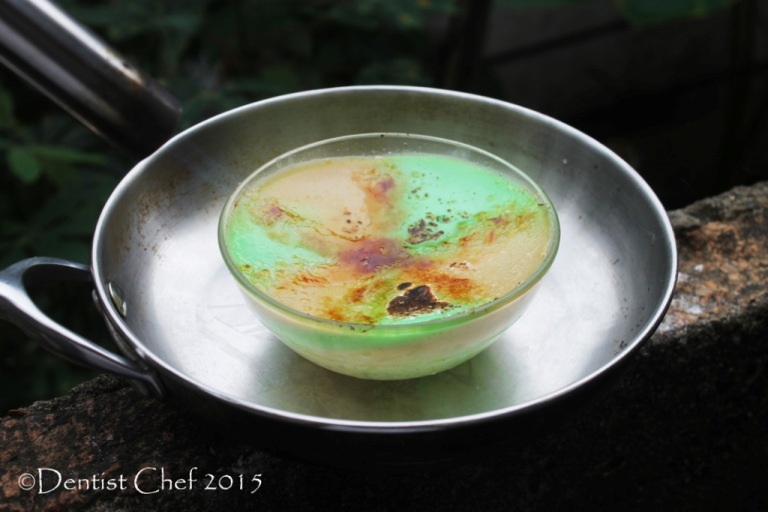 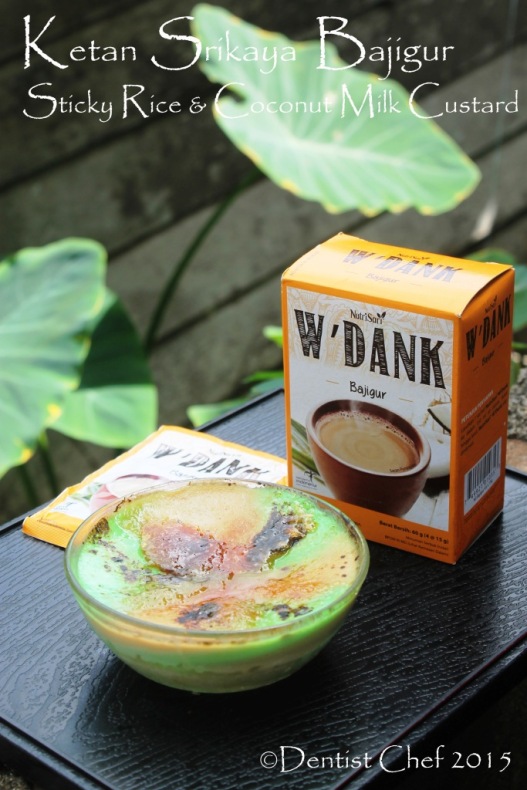 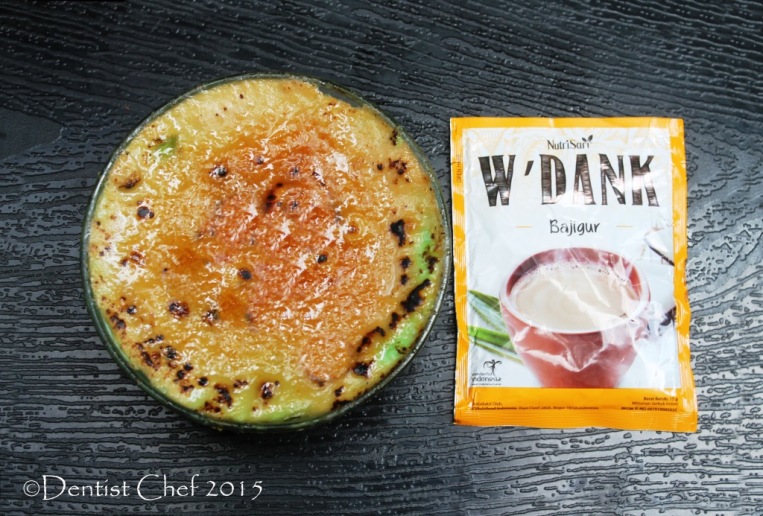 I love savoury sweet on my dessert, so i also add some fine grain salt when i put the caster sgar before i blowtorch it until it caramelized. the interaction of salt and caramel is amazing, more than umami, salted caramel over ketan srikaya a.k.a coconut cream with pandan and bajigur flavoured custard is totally worth the effort!!! 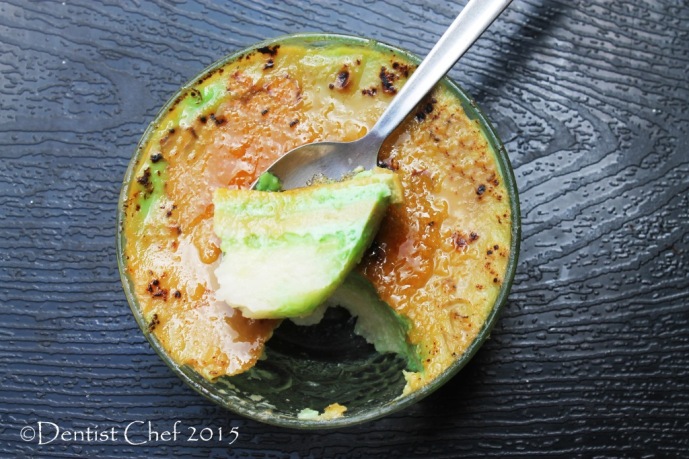 The key to make this smooth and silky coconut custard is the temperature of the steaming, use gentle medium flames as the custard set and cooked slowly. Too high heat will made the coconut custrd expand and let the water contest expelled from the stable custard and turned ito spongy and bubbly custard which had not nice texture. Also do not forget some cloth to cover the steamer to prevent the water dripping ruining your cucunot custard. 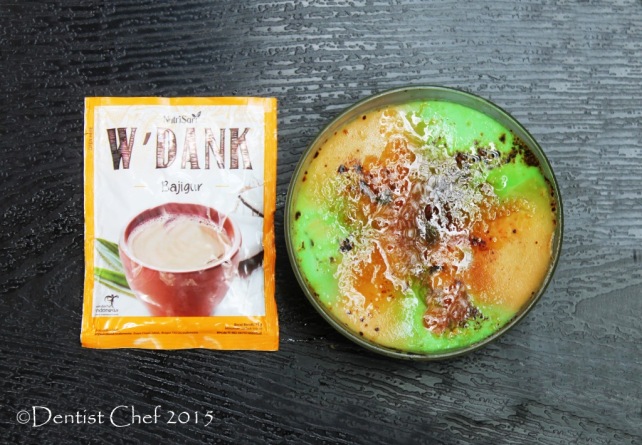 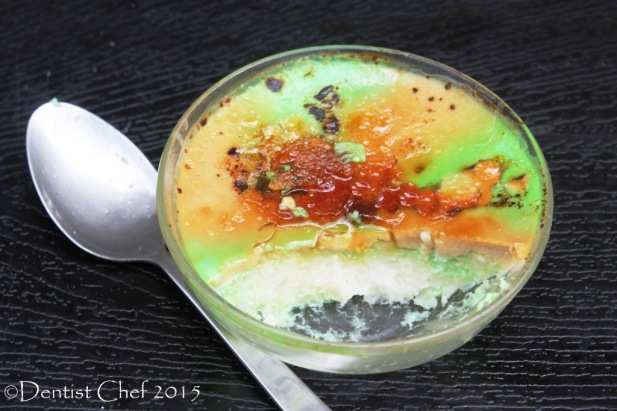 You need to know about any food ingredients before you try to cooked it. W’dank bajigur contain Aspartam, aspartame is a low-calorie sweetener used in foods and beverages in more than 90 countries around the world, so Aspartam is TOTALY SAVETY for FOOD. The deal about aspartam is when you want to cooked it using heat, DO NOT COOK or HEATED ASPARTAM OVER 100ºC !!!

Dr. Roberts states in his book, Aspartame Is it Safe? said that exposing aspartam in prolonged high heat (MORE 100ºC) will  derived Diketopiperazine, a toxic metabolite that you don’t wanna know about, but the point this is bad for your health. beside, cooking aspartam too long resulting in a loss of sweetness, therefore, aspartame is not recommended for use in recipes requiring lengthy heating. It may, however, be added at the end of the cooking cycle in some recipes. SO you ONLY CAN WET COOKING ASPARTAM like Boiling, Steaming, Poaching,  and i’m NOT RECOMMENDED DRY COOKING ASPARTAM (conducted heat more than 100ºC) like baking, deep frying or grilling. 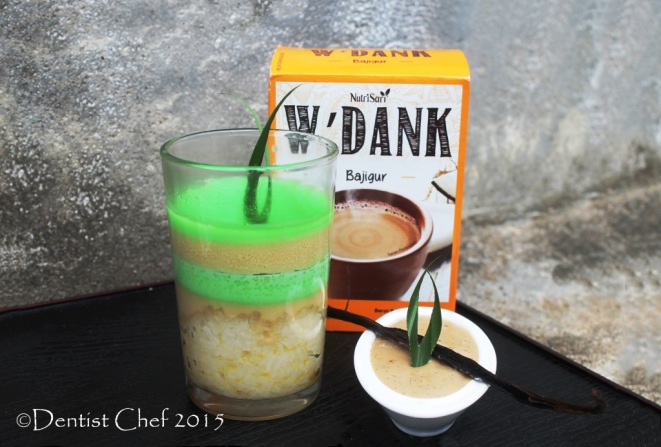 A. How to Cooking Glutinous Rice