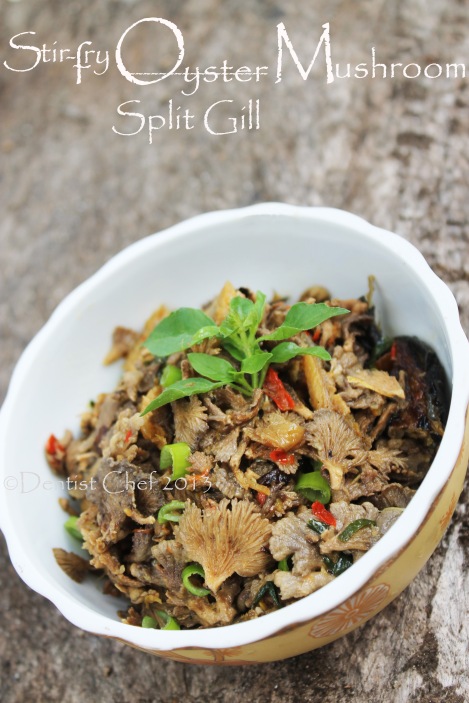 Stir fried oyster mushrooms with chilli, garlic and oyster sauce is quicky and tasty dish that popular in Indonesian kitchen. This  homey vegan (or not) dish is can be done as quick as you clicking your fingers. Oyster mushrooms is one of the major potential sources of vitamins B12(Methylcobalamin) for vegan dieters. I’m using jamur grigit, a spicies of tinu oyster mushrooms for this recipe,  but you can easily replace it with oyster mushrooms, abalone mushrooms or any edible mushrooms. 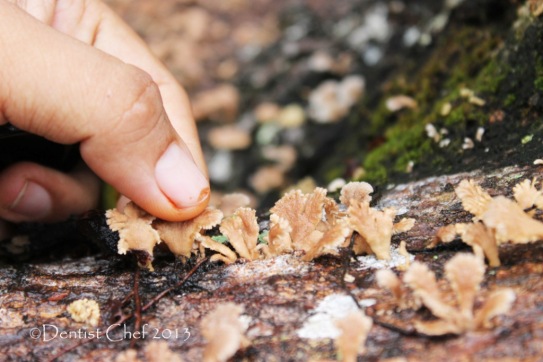 The jamur grigit cap is shell-shaped, with the tissue concentrated at the point of attachment, resembling a stem. It is often wavy and lobed, with a rigid margin when old. It is tough, felty and hairy, and slippery when moist. It is greyish white and up to 4 cm in diameter. The gills are pale reddish or grey, very narrow with a longitudinal split edge which becomes inrolled when wet; the only knows fungus with spit gills that are capable of retracting by movement. It is found predominantly from autumn to spring on dead wood, in coniferous and deciduous forest.

I’ve got a gigantic mango tree in front of my mother’s house in Muara Dua which my father plant by himself about 35 years ago. Due to the security concern, my father had to cut it off and the tree is left into decayed  in my own yard. After about 1 month the Jamur Grigit shown on mango tree surface. This tiny oyster mushrooms got blooming in the morning when the rain is came on the night before. The jamur grigit spit gills capable to retracting when it’s dried or exposed with sun ray. Thas why i need to wake up firstly in the morning and hand picked the jamur grigit, since i’ve got about 2 pounds of it and not using it all directly, i just sun dried about half of it to make it lass for another dish. If you want to use it, just simply rehydrate it overnight in te fridge, discard the sinking debris and drain the mushrooms well. The jamur grigit soaking liquid can be use to give the extra flavour too, don’t get rid of that. You can make a vegan meat just by pounded the mushrooms until it got shredded fleshy meat  texture and than mix it well with flour that called kanglayen Paaknam in Manipur cuizine, India.