Braising (from the French “braiser”) is a combination cooking method using both moist and dry heat; typically the food is first seared at a high temperature and then finished in a covered pot with a variable amount of liquid, resulting in a particular flavor. Braising of meat is often referred to as pot roasting, though some authors make a distinction between the two methods based on whether additional liquid is added

Braising relies on heat, time, and moisture to break down the tough connective tissue collagen in meat, making it an ideal way to cook tougher cuts. Many classic braised dishes such as coq au vin are highly evolved methods of cooking tough and otherwise unpalatable foods. Pressure cooking and slow cooking (e.g., crockpots) are forms of braising 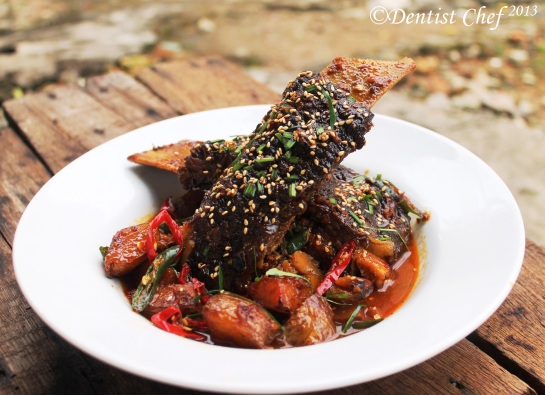 Most braises follow the same basic steps. The food to be braised (meat, poultry, but also vegetables or mushrooms) is first seared to brown its surface and enhance its flavor (through a process known as the Maillard reaction). If the food will not produce enough liquid of its own, a small amount of cooking liquid that often includes an acidic element, such as tomatoes, beer, or wine, is added to the pot, often with stock. Classically a braise is done with a relatively whole cut of meat, and the braising liquid will cover 2/3 of the product. The dish is cooked covered at a very low simmer until the meat is fork tender. Often the cooking liquid is finished to create a sauce or gravy.

It is possible to braise meat and vegetables in a pot on top of a grill. A gas or electric grill would be the best choice for what is known as barbecue-braising, or combining grilling directly on the surface and braising in a pot. To braise on a grill, put a pot on top of the grill, cover it, and let it simmer for a few hours. There are two advantages to barbecue-braising: the first is that this method now allows for browning the meat directly on the grill before the braising, and the second is that it also allows for glazing the meat with sauce and finishing it directly over the fire after the braising, effectively cooking the meat three times, which results in a soft-textured product that is very tender.

When i saw a big slab of beef short ribs in the meat section during my groceries shopping, i know exactly that i need to braised it. The dark mear is actually less marbled and leaner than regular beef ribs. The less fat content means this ribs is needed to break down in a low cooking.Grilling is not a good option because lean meat is tent to over dry easily. 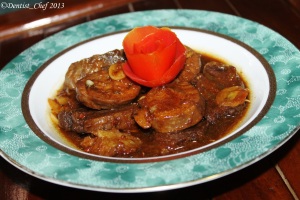